We spent a few days in the wonderful, if touristy, city of Brugges in Belgium and then headed for our hotel in Brussels – it was on the Boulevard Adolphe Max.  We didn’t realise when we booked the hotel, but that was the same street as Waterstones!

According to the website, “The bookshop first opened in the 1920s as a W.H.Smith, famous for its tea-room, trading books, magazines and stationery. In the 1940s, it was taken over by the Germans, soon to become an officer’s mess when the Allied Forces liberated Brussels.”

It even has a section of British food for ex-pats!!

Brussels is a great city.  It’s probably best known for the Brussels Boy (aka Manneken Pis – the statue of the urinating boy.  It is often dressed up and has lots of outfits.  Personally I think it’s pretty horrible!), the Atomium sculpture and the European Parliament building.

There are far too many landmarks and attractions in Brussels to name them all.  One of our favourites was the Basilica of the Sacred Heart, where you can pay a few Euros to go up the tower to see fantastic views of the city.

Despite the crowds, we also liked the Grote Markt (central square) and Egmont Park which contains one of Frampton’s statues of Peter Pan (the same as the one he was commissioned to make for Kensington Gardens).  I could go on and on…! 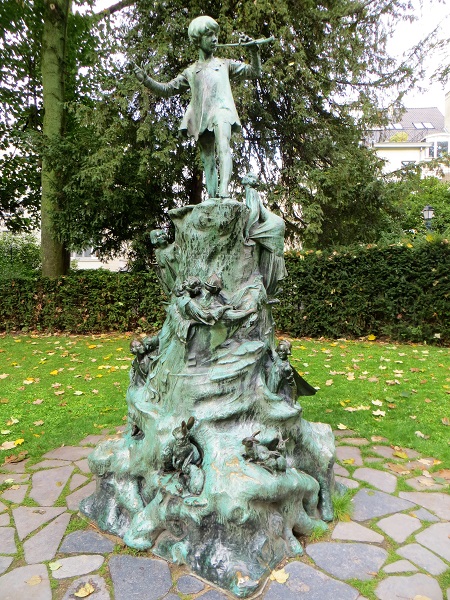