Newton Abbot is a small market town south Devon with population of around 25,000 people.  It has a four different markets – indoor, outdoor, produce and livestock.  The population increased considerably in the Victorian era with the arrival of the railway.

The Waterstones is located in a pretty building in Courtenay Street in the centre of the town. 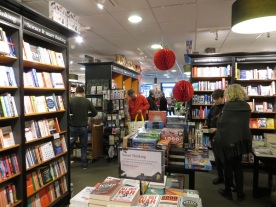 Not far from Waterstones is St Leonard’s tower, all that remains of a 13th century chapel which had to be demolished 1836 as it had become dangerous.

In front of it is a commemorative plaque which marks the site where the first pronouncement of William III, William of Orange, was read. It reads:

“The first declaration of William III, Prince of Orange, the glorious defender of the Protestant religion and the liberties of England, was read on this pedestal by the Rev. John Reynell, rector of this parish, 5th November, 1688.”